Dedicated to promoting social inclusion through shared sports training and competition experiences, Unified Sports joins people with and without intellectual disabilities on the same team. It was inspired by a simple principle: training together and playing together is a quick path to friendship and understanding.

In Unified Sports, teams are made up of people of similar age and ability, which makes practices more fun and games more challenging and exciting for all. Having sport in common is just one more way that preconceptions and false ideas are swept away.

Young people with disabilities don’t often get a chance to play on their school sports teams, but more and more U.S. states are adopting the unified sports approach that Special Olympics pioneered. For almost 20 years, Special Olympics has offered sport teams that blend people with and without intellectual disabilities, and that is a model that encourages sports and fun, and which also gets people together to learn more about each other. You can learn more about unified sports and get involved with SOLA by clicking here.

Toys“R”Us is the Presenting Sponsor of the first-ever Young Athletes Festival at the 2014 USA Games. Furthering its commitment as a Founding Partner of the 2014 Special Olympics USA Games, Toys“R”Us announced the February 1 launch of a nationwide in-store and online awareness campaign. By texting “CHEER” to 80888, customers can make a $5 donation via their mobile device that will help support Special Olympics athletes participating in the “Games of Welcome and Acceptance” being held in New Jersey from June 14-21. Read the full release

Toys”R”Us has also highlighted a Young Athlete from each state on their website, check out Louisiana’s very own, Peyton Stanley…Click on Louisiana here.

St. Thomas More Cougars have something to say about the R-Word! Watch their video…

John Franklin Stephens, Special Olympics Virginia Athlete, was deeply offended when Ann Coulter used the R-word in a tweet following the last presidential debate. He took a stand and explained to not only her, but to the world how to exceed expectations and how offensive certain words can be.
He stated in his letter, “Ms. Coulter, you, and society, need to learn that being compared to people like me should be considered a badge of honor. ”

We here at Special Olympics Louisiana are very excited to once again be selected by Special Olympics, Inc. as a Project Unify state! We have several schools across Louisiana that help us with this project and support our efforts for change and inclusion.

education programs to activate young people to develop school communities where all youth are agents of change – fostering respect, dignity and advocacy for people with intellectual disabilities.

What started a few years ago has grown into a huge movement! Many students are creating commercials and programs in their schools to make a difference. Click the blue Project Unify to view all the resources, fact sheets, videos, etc. Learn more about Project Unify

On March 30, the documentary BULLY opened in select theaters and is garnering tremendous media attention and has already begun to serve as a catalyst for conversation on the topic of bullying. 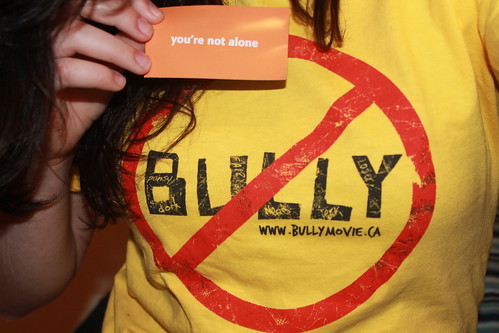 Over 13 million American kids will be bullied this year, making it the most common form of violence experienced by young people in the nation. BULLY brings human scale to this startling statistic, offering an intimate, unflinching look at how bullying has touched five kids and their families. “60% of students with special needs reporting being bullied compared to 25% of general education students” statistics like this demonstrate the severity of this issue for the specific population of students with disabilities. In March, the White House hosted a conference on bullying prevention. Tim Shriver, CEO of Special Olympics, attended the event, representing the voice of those with intellectual disabilities and the mindset that it was time for a change.

Bullying is an issue closely connected to the movement of acceptance and inclusion that has been going on for the past 44 years at Special Olympics. Special Olympics is not an official partner, nor direct endorser, of this film, but we applaud the efforts of all who seek to create a safer, more accepting and respectful world for all. View more information or find resources how you can help.