EKS Day is tomorrow and we’re encouraging you to join us and #PlayUnified!

The sixth annual Eunice Kennedy Shriver (EKS) Day will take place tomorrow, Spetember 26th.  This is an annual celebration of her life and a global call challenging everyone to “Play Unified to Live Unified” because Mrs. Shriver taught us that on the playing field, we forget about our differences and recognize our mutual humanity.

EKS Day is an opportunity to celebrate the impact that one dedicated individual can have on the world.

The fifth annual Eunice Kennedy Shriver (EKS) Day will take place tomorrow, September 27, 2014!  This global call to action is for people to live in a more inclusive society.  Not only through sports, but also in the community.

We encourage all of our followers to go out tomorrow and take part in a Unified event, take some pictures, and leave a comment on this post about your day.

Eunice Kennedy Shriver Day will take place on Saturday, September 27th.  This annual date, now in its 5th year, celebrates Mrs. Shriver along with encouraging all to Play Unified! The world is encouraged to host inclusive sports events to let communities come together to showcase our abilities and not disabilities.

How will you celebrate EKS Day?

“Special Olympics teaches that all human beings are created equal in the sense that each has the capacity and a hunger for moral excellence, for courage, for friendship and for love.”

“Whatever the speed of our feet or the power of our arms, each of us is capable of the highest virtues.” – Eunice Kennedy Shriver

Mandela, along with the Nelson Mandela Children’s Foundation, worked with Special Olympics Founder Eunice Kennedy Shriver and Special Olympics to reach out to people with intellectual disabilities and their families as well. Through this joint venture, new opportunities were given to a population that had long been ignored.

In the words of Mandela, “Only 50 years ago persons with intellectual disabilities were scorned, isolated and neglected. Today, they are able to attend school, become employed and assimilate into their local community.”

Special Olympics Louisiana, President and CEO, Pat Carpenter Bourgeois remarks, “I am saddened by the news of the death of Nelson Mandela. He was an advocate for Special Olympics, attended many events, and renewed hope in people with disabilities who came to Special Olympics through his involvement. We are fortunate to have had him as a part of our Movement. He will be missed by us and leaders around the world.”

Tomorrow is the 4th annual EKS Day or Eunice Kennedy Shriver Day.  We will be celebrating tomorrow by going to basketball camp hosted by the University of New Orleans Basketball Team!  Our athletes will participate in drills and also play in a unified game.

We actually started celebrating a day early (!)… We hosted the awards portion of our Camp Shriver at Magnolia School this morning and our athletes were treated to a wonderful speech about Eunice Kennedy Shriver by one of our veteran staff.

How will you celebrate EKS tomorrow?

One month from today, September 28th, is Eunice Kennedy Shriver Day or EKS Day!  We are all looking forward to this day. 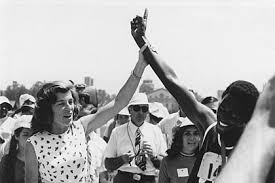 “What you are winning by your courage is far greater than any game. You are winning life itself and in doing, you give to others a most precious prize…faith in the unlimited possibilities of the human spirit.”
~ Eunice Kennedy Shriver